(The bitter cold and darker days of late December were the ideal time for me hunker down and create my photo journal of my time in Spain.  Here is the final story of my time at Finco Buenvino and the writing retreat.)

September 8 marks the annual pilgrimage of the Andalusian villages of the Sierras, including Sevilla, of their patron saint, La Reina de los Angeles, to the hermitage site at the Pena de Arias Montano.

The Virgin Mary of each village, ensconced in her cart of local colours, is led by festooned bullock up and down dirt roads and paved highways to converge at the gates and be formally welcomed with staff and banner into the festival grounds.  The procession continues up the hill to the church where she is paraded in front of the Queen of the Angels.  When all the villages have arrived, been blessed by the priest, docked their carts and tethered their horses and bullock, the Queen leaves her cloistered seclusion, and is solemnly led through crowds fervent with passion, heat and drink, to the sound of cheers and pealing bells. 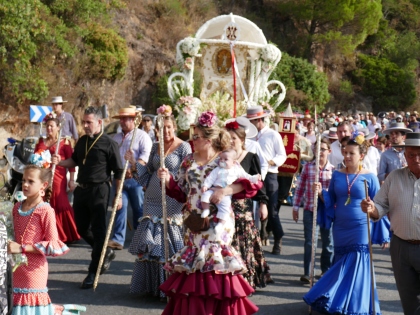 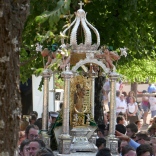 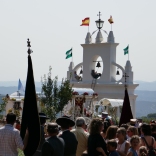 This was an invitation to step alongside and sink beneath the surface of Andalusian life. 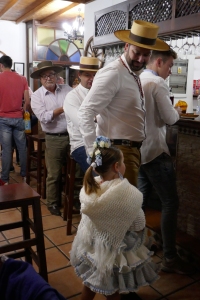 With shawls wrapped tight against the predawn chill, we huddled in the van taking us to Fuenteheridos, the village we’d join for this rite.  Fortified by cafe con leche, toast, cheese and jambon in the crowded local bar, we gathered in the main square along side stately riders in gaucho, girls and women in flamenco, drummers, and the red and white flowered cart holding the guilt Virgin.

A slow pace ensued, and shortly after leaving the town, we made a pit stop at the roadside tent to purchase shots of the local home brew, a curious taste of cherry and anisette.  The first sip warmed, the second, sickly sweet warned of headache and thirst as the day warmed and was soon abandoned or given over to those hardy imbibing at seven in the morning! 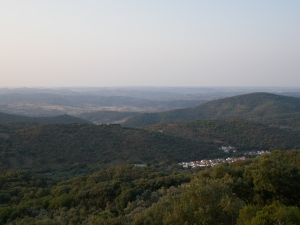 A rest stop at the highpoint overlooking the valley and its villages afforded time for a dance and family photos and flirting. 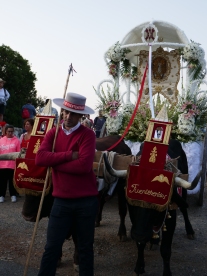 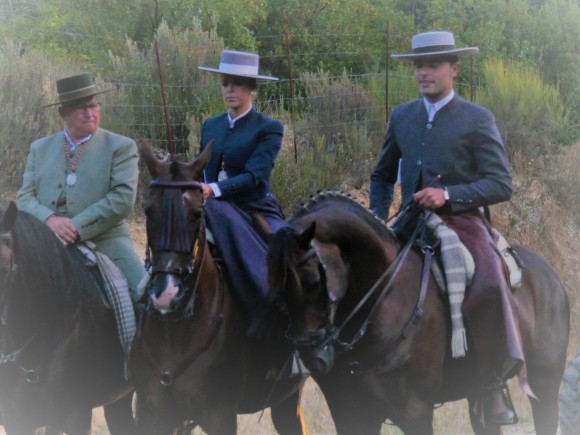 Another stop at the hairpin curve in the road, and flamenco spontaneously filled the air with music, dance, colour and laughter. Every woman regardless of age joined in dance.  Ahhh, this was duende! 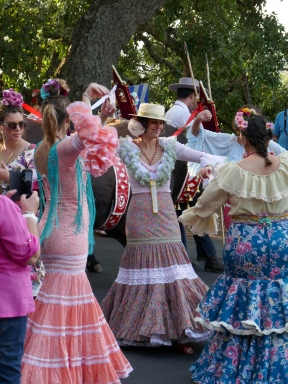 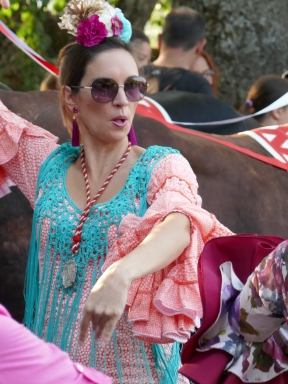 Once arrived, the carts parked, horses and bullocks watered, village folk congregated in their designated areas to share song, story and food.  We rested among the trees, on ground baked hard and hollow from the summer heat and observed groups of virile young hombres strut back and forth across the grounds, catching the kohl-lined eyes of the vivacious senoritas. 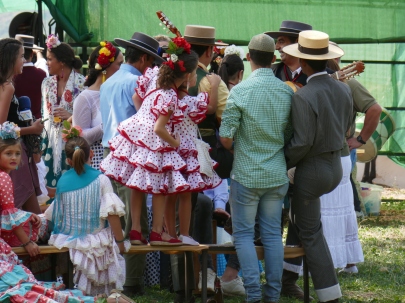 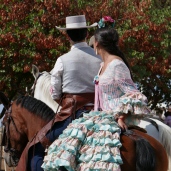 Languorously, I imagined days gone by, before easy and accessible transportation and communication, when such gatherings, though religious in nature, were a necessary means for village survival, as mates would be found, stories and harvest shared, wisdom gleaned.  For me, an obvious tourist, an occasion to sit amidst community and appreciate.

Leave a Reply to Transactions with Beauty Cancel reply