Access to Newfoundland’s Great Northern Peninsula, via three nights’ stay at Tuckamore Lodge in Main Brook, gave us the opportunity to visit the old French Shore fishing villages of Conche and Englee, sail into Iceberg Alley off St. Anthony, and head to the island’s northern most tip to the UNESCO World Heritage site of L’Anse aux Meadows, now known to be the first settlement of Europeans on North America.

Given this was billed as a hiking, kayaking and arts tour, we were treated to a hands’ on demonstration of the embroidery used to create Conche’s famous French Shore Tapestry, a 220 foot long linen and wool mural depicting the history of Newfoundland from its earliest times to present.  Designed by French-Newfoundland artist Jean Claude Roy, and meticulously stitched – over 20,000 hours and four years – by a dozen of the village’s women, this colourful labour of love hangs in the local community hall.  After a picnic lunch of cod au gratin, tea and date cake, prepared and served by some of these same women, we strolled through the village, taking in the sites of fishing dories and lighthouse, the iceberg in the cove, sunshine sparkling on blue water, painted clapboard houses. The wind blew cold and I was bundled accordingly, while June’s summer sun brought out short sleeves and flip flops on the locals. 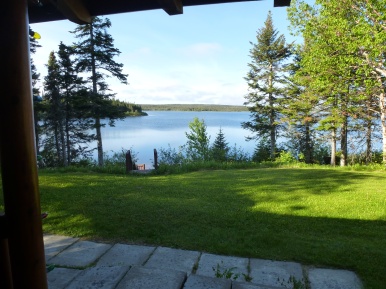 Eager to see more, several of us drove further down the coast into Englee for a viewing of hand hooked rugs.  Again crafted by local women, this was a project, like many along the island’s fishing coasts, that served to resurrect an old island craft, provide revenue from tourism, and instill confidence in communities left bewildered and bereft by the Cod Moratorium of 1992. None were for sale, as this would be a collection travelling throughout the island, and I was inspired to make a purchase at the Grenfell shop in St. Anthony of a small hooked sampler featuring vignettes of my favourite sites, my souvenir. 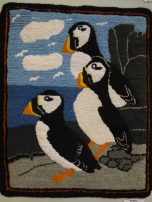 St. Anthony, touted as the “Iceberg Capital of the World, “ lived up to its reputation with an iceberg in the cove below the lighthouse and then a huge specimen off shore, said to be grounded given it hadn’t moved since first its first sighting.  In the distance several miles out, several more loomed on the hazy horizon, barely hinting at their mass, both above and below sea level.  Again our weather was perfect for picture taking – not too sunny – and the swells a visceral reminder of the sea’s enormous power. 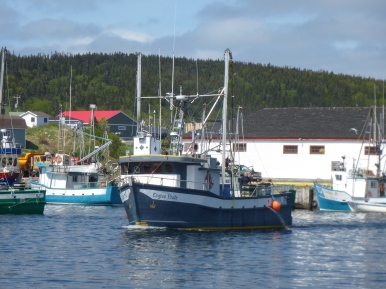 The same day we drove north along the Viking Trail to L’Anse aux Meadows.  I did a rough pen and ink sketch, then painted from memory and impression during my overnight in Deer Lake before flying home.  I was heartened to know I’d captured enough of the location and mood that a friend, who visited years ago, readily recognized the scene.  My reflections on that land and connections made to home came several days later.

Two days travelling then waiting.  Anticipation grows with the wish to be settled back home.  Thankfully all uneventful, as a day later, and for several more, re-routing, premature landings, delays, all in response to bomb threats on my airline.  The world’s madness – is it more than ever, or the consequence of instantaneous connection – hits my consciousness broadside, closer to home.

And what of those ancient mariners and the many days’ and weeks’ and months’ anticipation and sailing across the ocean?  What bold imagination and steel-hearted courage, madness even, drove them from their Nordic homeland to what we now call Iceland, Greenland? And then further south, to be the first of their kind, my kind, to settle on this, my home and native land?

L’Anse aux Meadows, the very tip of Newfoundland’s northern most shore.  One thousand years ago.  We now know centuries before the likes of men we call Cabot, Columbus, Cartier.

When I recall the day I disembarked from the van, set foot on and looked out over that first “from away settlement,” over the bare expanse of naked land and sea and sky – cold and windy and grey and raining – I can hardly imagine, in a thousand years, their first reaction to seeing and setting foot.  Unless I search in my own DNA and evoke that of my father’s, when he first saw, from the ship carrying him across the ocean from Germany, and set foot on the land that he would claim and make home, that day over a mid-century ago. 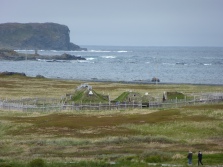