I’ve been thinking about sadness these past weeks, because goodness knows, there sure is a lot going on in this precious world right now worthy of our sadness and tears. Maybe that’s the way it’s always been and I’ve simply not been aware of it in quite this way. And-or, being careful not to displace, acknowledging and feeling my own “inside” sadness of late. Finding the rub of simply letting it be and flowing through, without needing to know the precise or even vague why. Trusting the wisdom beneath the words, beyond the mind’s meaning making. Knowing the chasm of resonance, between the sadness “out there” and “inside,” while eons’ deep, is only a hair’s width across. Considering might it all be the same, varying in degrees?

I’ve been thinking a lot about something I heard Fred Kofman say when I studied with him in June 2003 at the then Shambhala Institute of Authentic Leadership. “The challenge,” he said, “is to learn how to keep one’s heart open in hell.”  Whether Fred was quoting from another great teacher, as was his wont, or came to this from his own life experience, I quote him and it often. And then a few weeks ago, I came across a similar idea, this time a quote from W.B. Yeats, “Too many things are occurring for even a big heart to hold.”

And I’ve been wondering, how open, how big do our hearts need to be to hold it all, out there, and inside? I wonder about those of us who are especially sensitive, who feel it all deeply and have trouble discerning which is which. I wonder about those whose sadness tempers, fires, strengthens, softens, and opens them to the wise and humble and mysterious and vulnerable. And I wonder about the lost souls whose hearts have broken, tormented by their own hell, exhausted by holding up and in, who finally give up or give in, who suicide to death, or surrender to life. 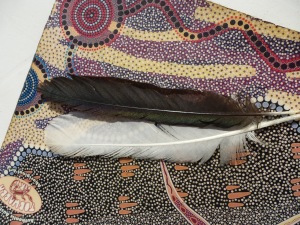 Yesterday, as I walked my dear Peggy dog (she in her 17th year, in what may well be her last chapter, the reality of which pierces and prepares my heart for those final words), I found a small dark feather on the grass. With its iridescent blue-black colour, I suspect it dropped from that trickster, the magpie. I passed it by and steps later, found a larger, fuller, absolutely white one that I felt moved to pick up. Not two steps later, its dark twin, which I, too, retrieved.

Holding those simple talismans of light and dark, flight and groundedness, air and earth, peace eased in and opened my heart a little more.

4 thoughts on “How Open, How Big Our Hearts”